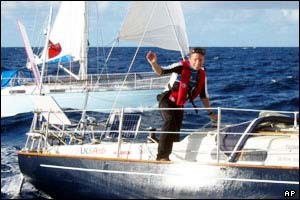 Seb Clover has been chosen as the sailor for Year 6 class name .

Seb is a passionate, talented & determined sailor. He inspired and supported by his father, he started sailing at an early age and when just 11 – when he was Y6 –  he sailed single-handedly across the English Channel.

Following this he rose to the challenge set by his mother who dared him to sail the Atlantic. He took this challenge seriously and spent the next 4 years preparing for the challenge.

Seb and his father decided to both sail alongside each other in a 5,000km race from the Canary Islands to Antigua. During the race they soon became parted and Seb had to deal with loneliness, lack of sleep, hunger, navigation, sea creatures and dangerously broken equipment all by himself with only a radio for communication, advice and interaction.

Finishing a day behind his father, Seb arrived in Nelson’s Dockyards, Antigua on the 12th January 2003 having spent a nearly month at sea including Christmas. He may have lost the race but being 15yrs and 362 days old on arrival meant that he set a new world record for being the youngest person to sail single-handed across the Atlantic Ocean.

Seb inspires us because he achieved these incredible feats when a similar age to us – if he can attain such a technical abilities and apply them in such incredible ways – then what could we be capable of ?!  We will use him as a role model to push ourselves to try new challenges and have the perseverance, strength and resilience to continue when we find the going tough.

What are we learning about this term?