At Brighstone CE Primary we follow the Living Difference III Scheme of Work.

Living Difference III seeks to introduce children and young people to what a religious way of looking at and existing in the world may offer in leading one’s life, individually and collectively.

These three ways of conceptualising religion also relate to different theological positions and may be found as overlapping to different extents within any particular religious tradition.

Religious education in Hampshire, Portsmouth, Southampton and the Isle of Wight intends to play an educative part in the lives of children and young people as they come to speak, think and act in the world.

This entails teachers bringing children and young people first to attend to their own experience and that of others, to engage intellectually with material that is new and to discern with others what is valuable with regard to living a religious life or one informed by a non-religious or other perspective.

At Bighstone CE Primary we aim for young children to explore religion through a wide range of stimuli that engages, challenges and supports the learner as they begin to understand the complexities of a religious life. 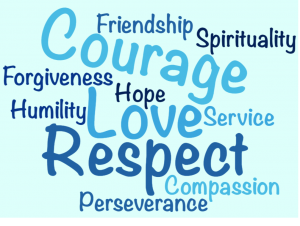 “Brighstone School is an excellent school.  Very happy with the progress my child is making”

“My child has come on in leaps and bounds and has massively surprised me.  I am very happy.”

Thanks to all parents who took part in our recent Parent Questionnaire.  We are proud to report that 100% of parents who responded said that their child is happy and feels safe at our school.  The responses this year also show an overall improvement in the school’s performance in  meeting particular pupils’ needs, supporting learning, receiving information about progress and dealing with bullying – and it was great to see that you feel we are good at keeping you well informed.

You can help raise money for our school and others!